Student: Prudence Anne Amsden, Mapped projection, Folding Chairs and Zipties
This piece is the final result of looking at the relationship of movement with an intimate object.

Part 1: Answering the question map
There will be a series of different questions guiding each person through the “question map”. Each person with their unique life experience and condition, will be walking a different path.

Part 2: The conclusion
The question map will end at 4 different points, each one a popular metaphor, each metaphor a trait to be interpreted by each person. 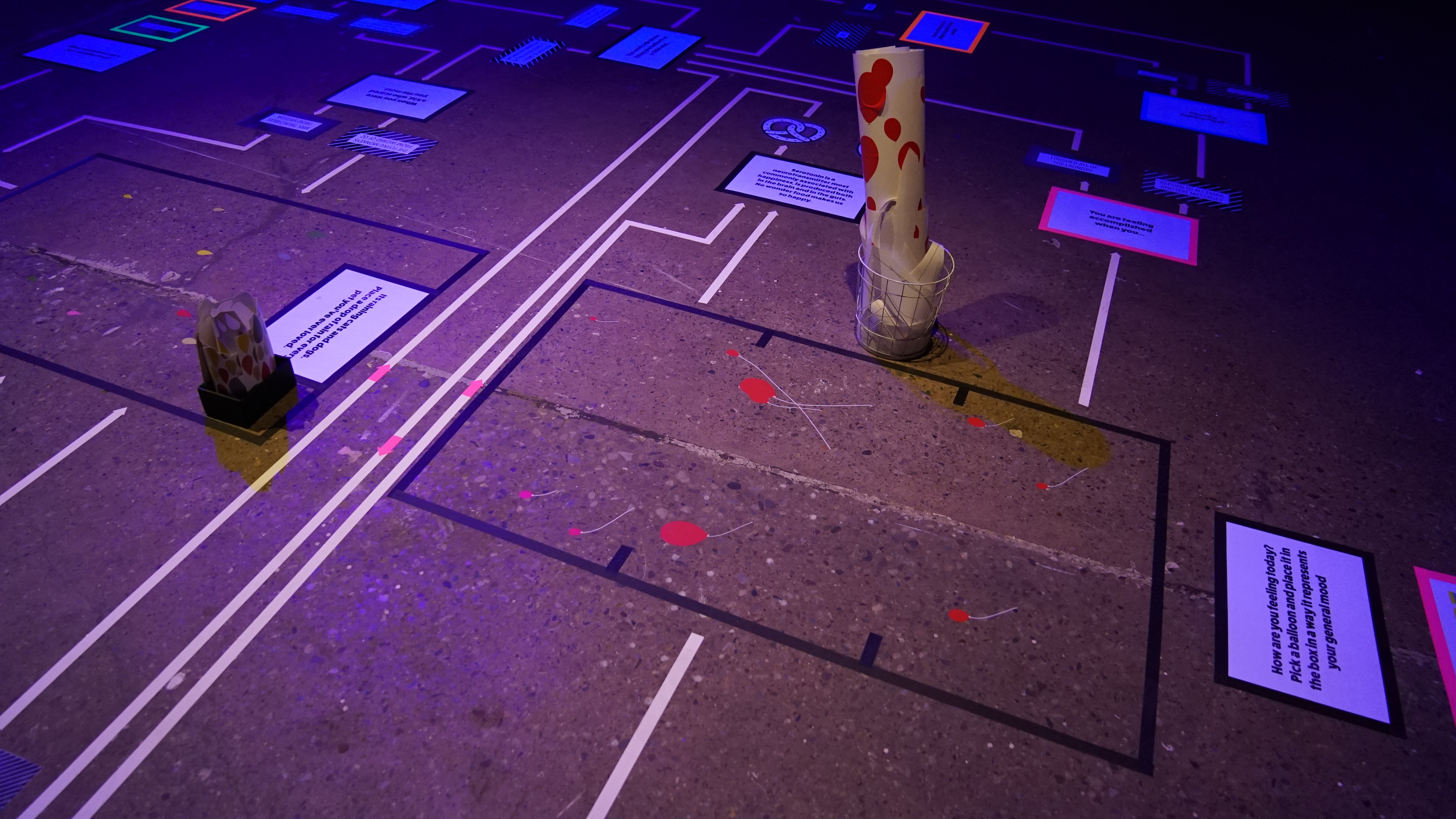 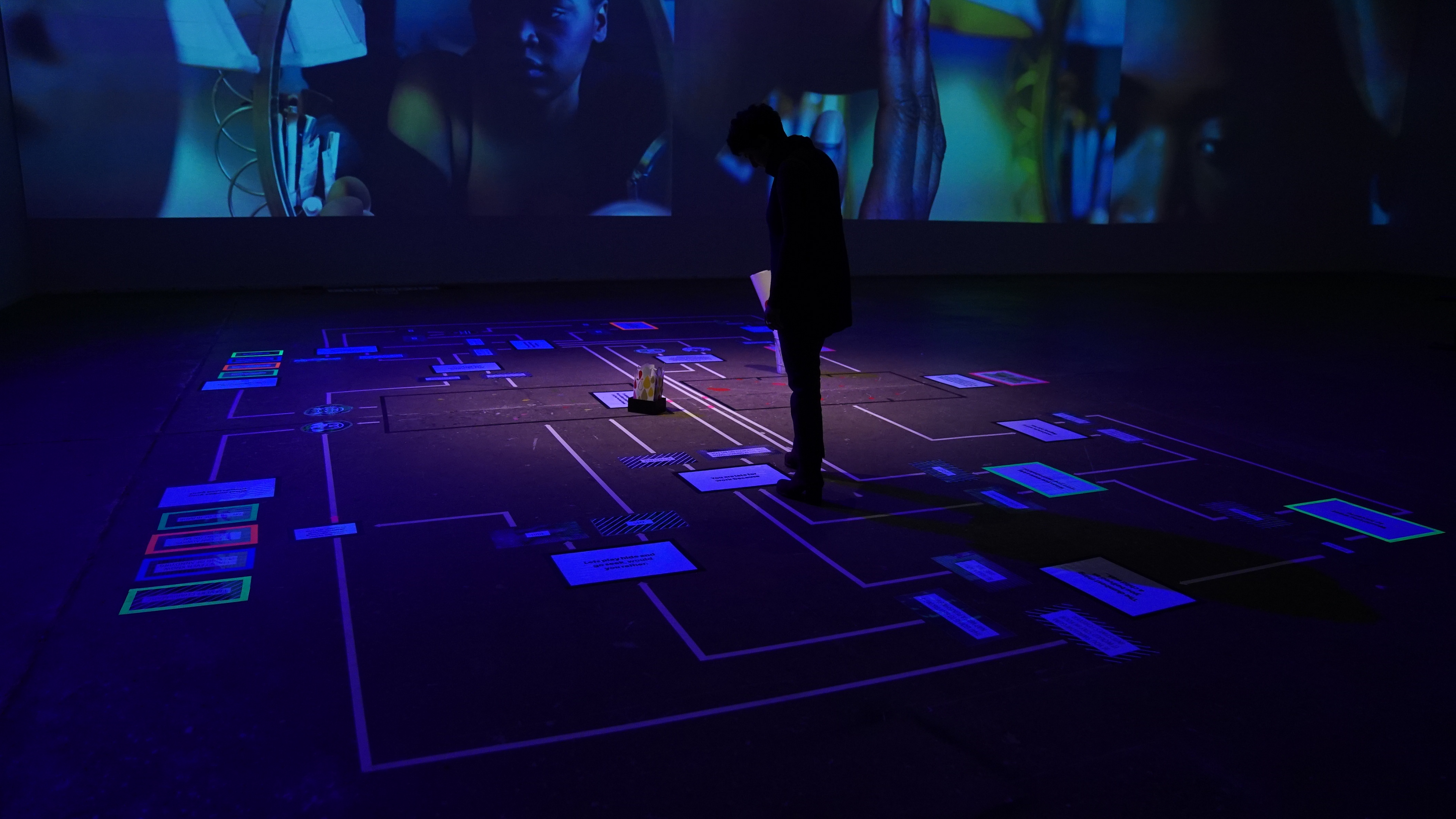 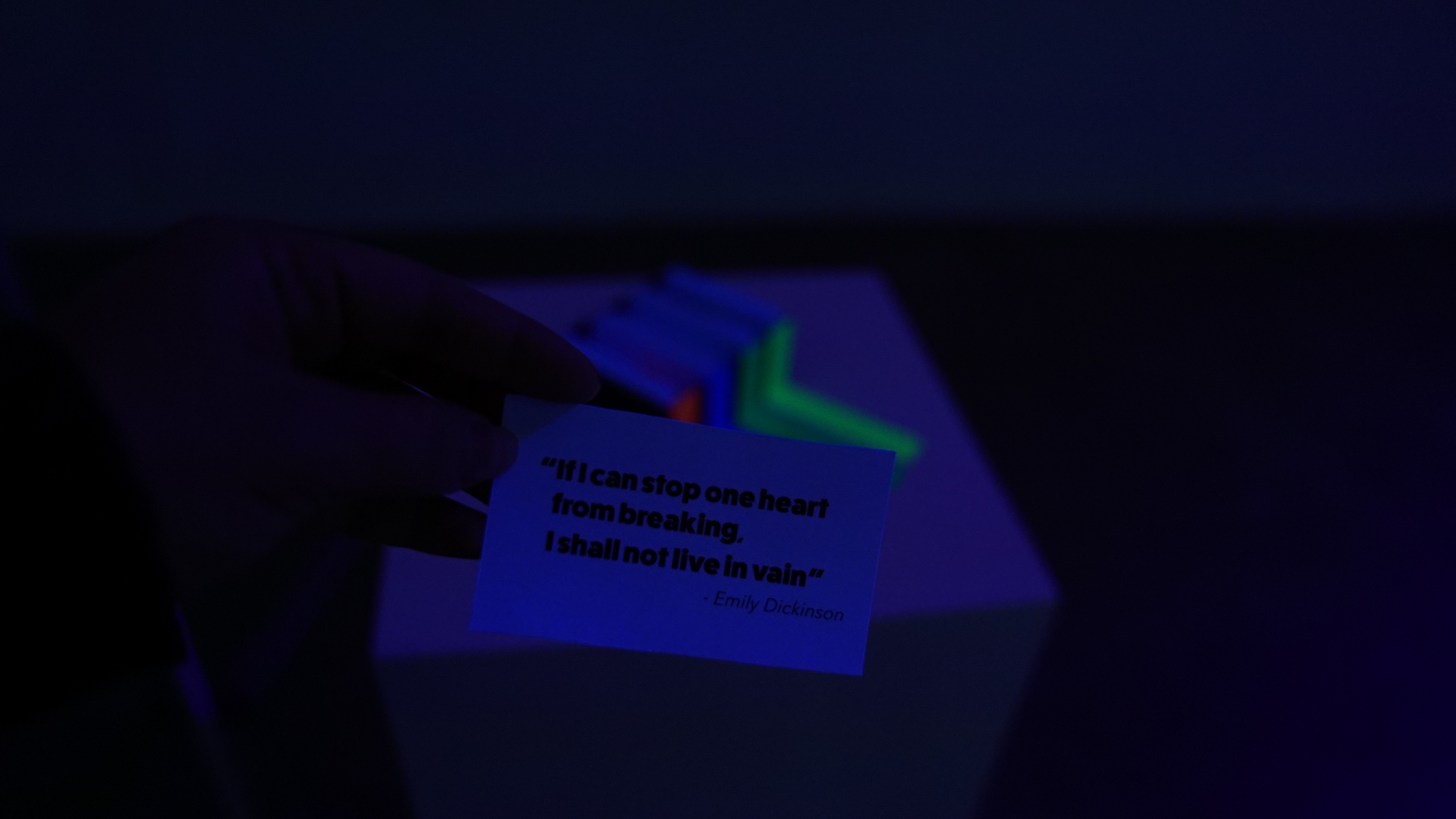 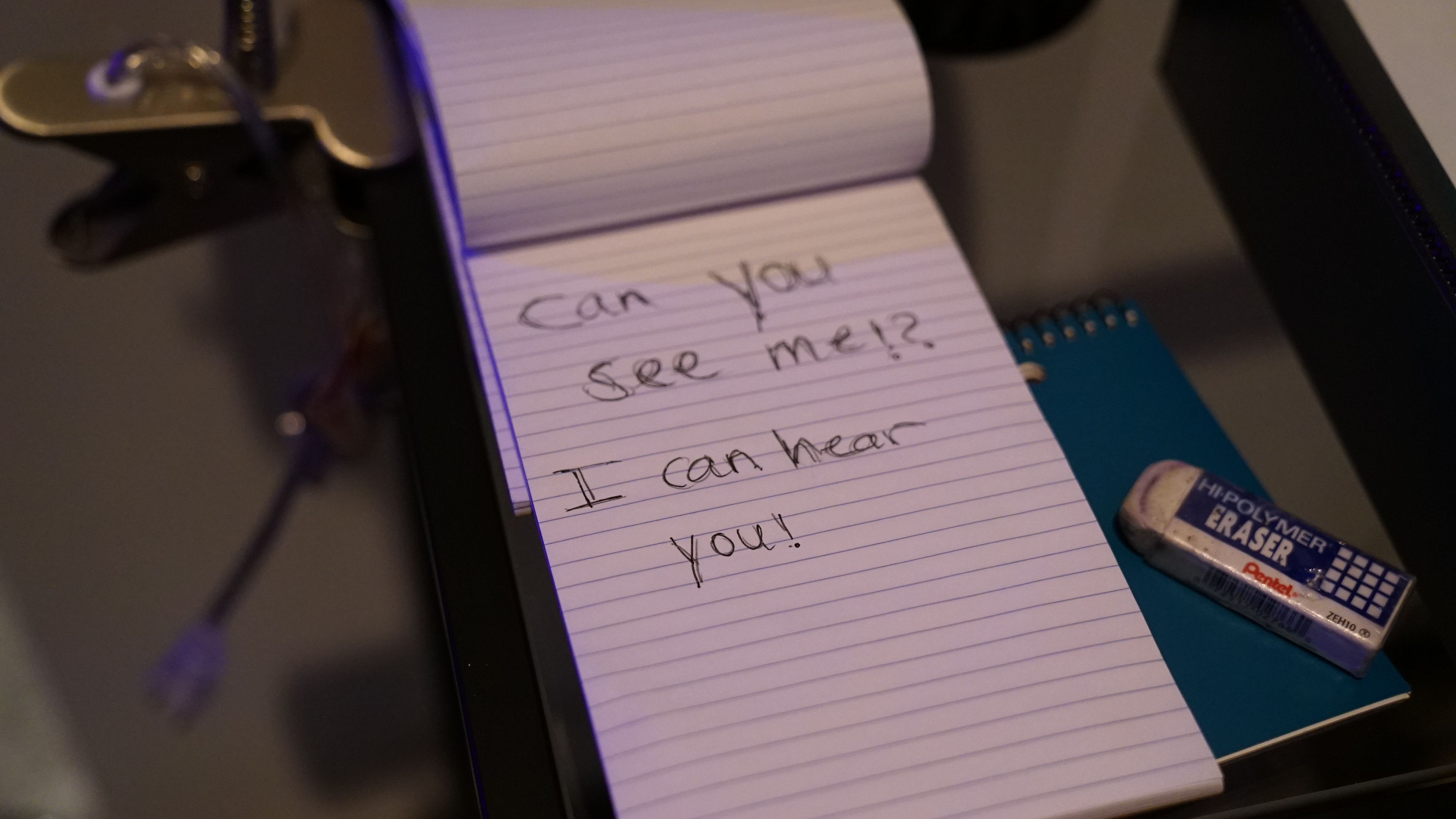 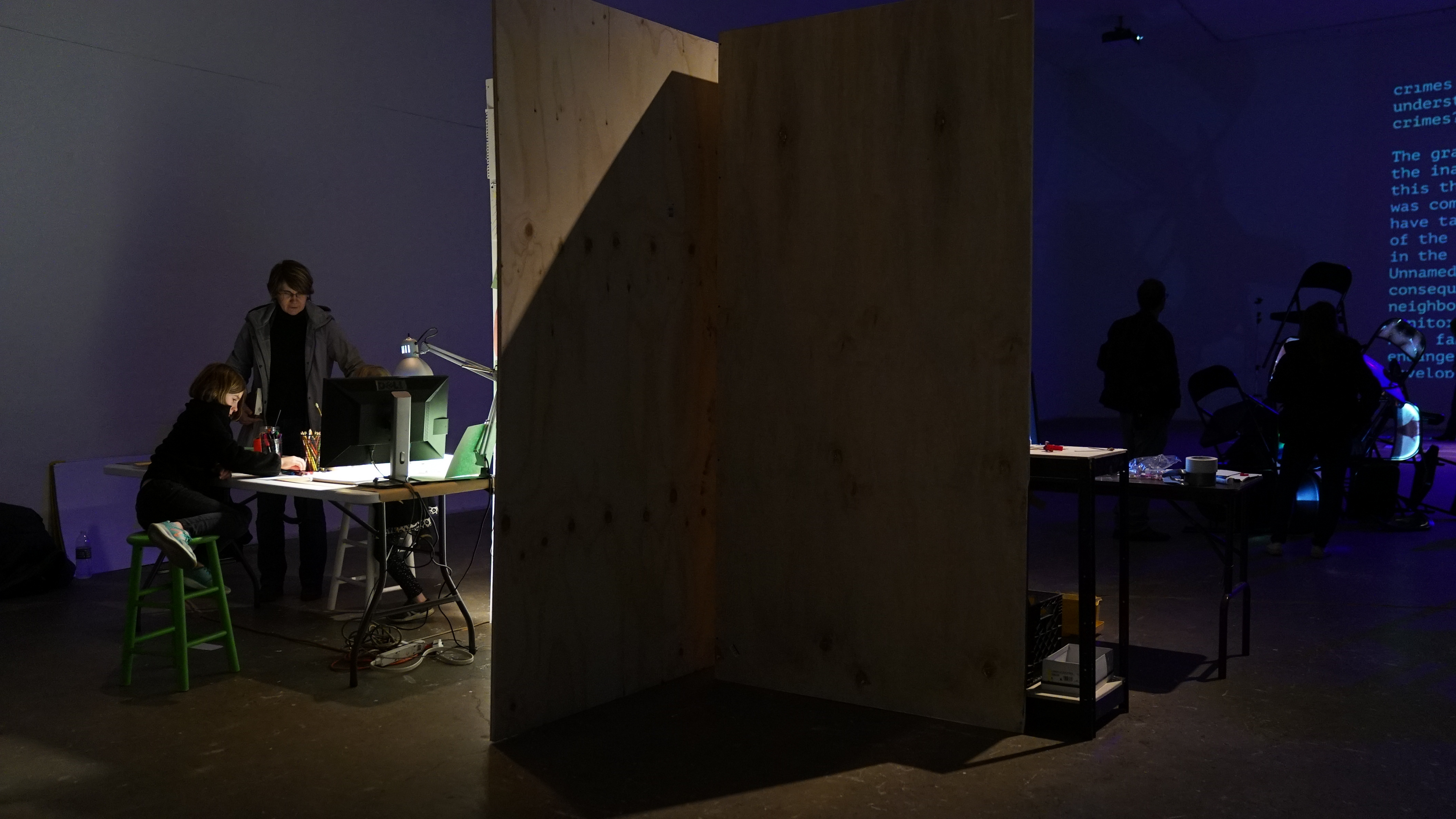 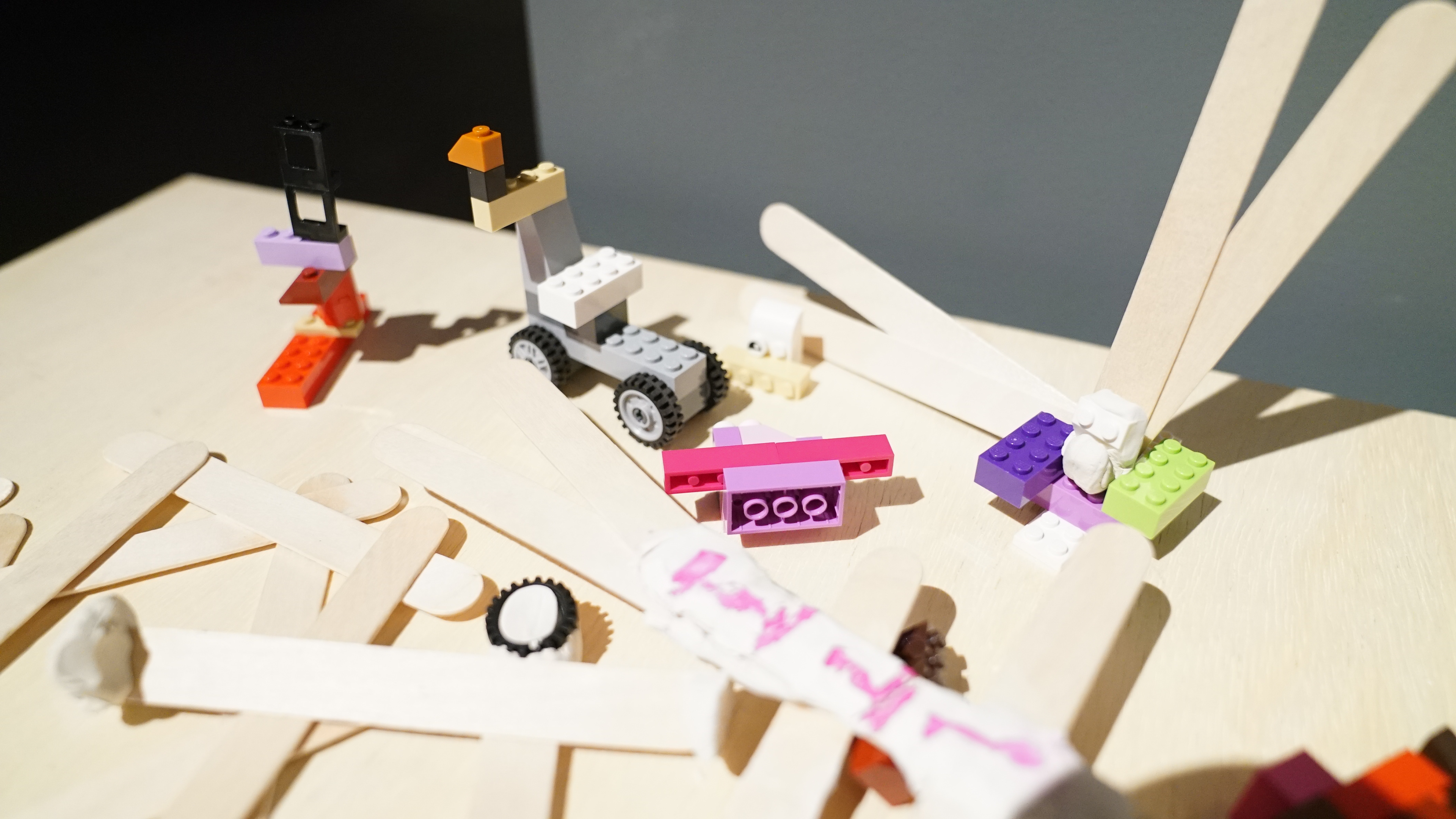 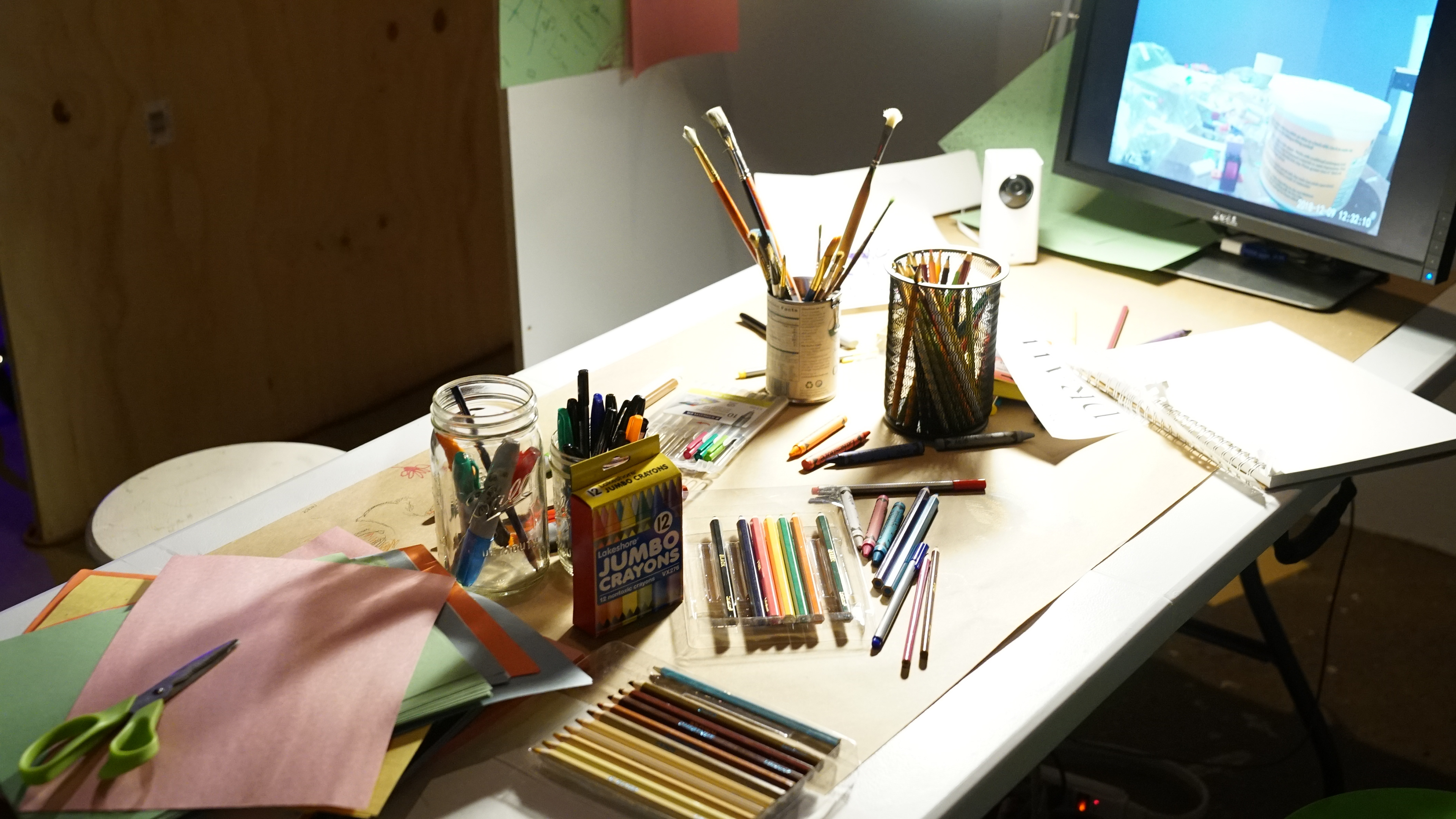 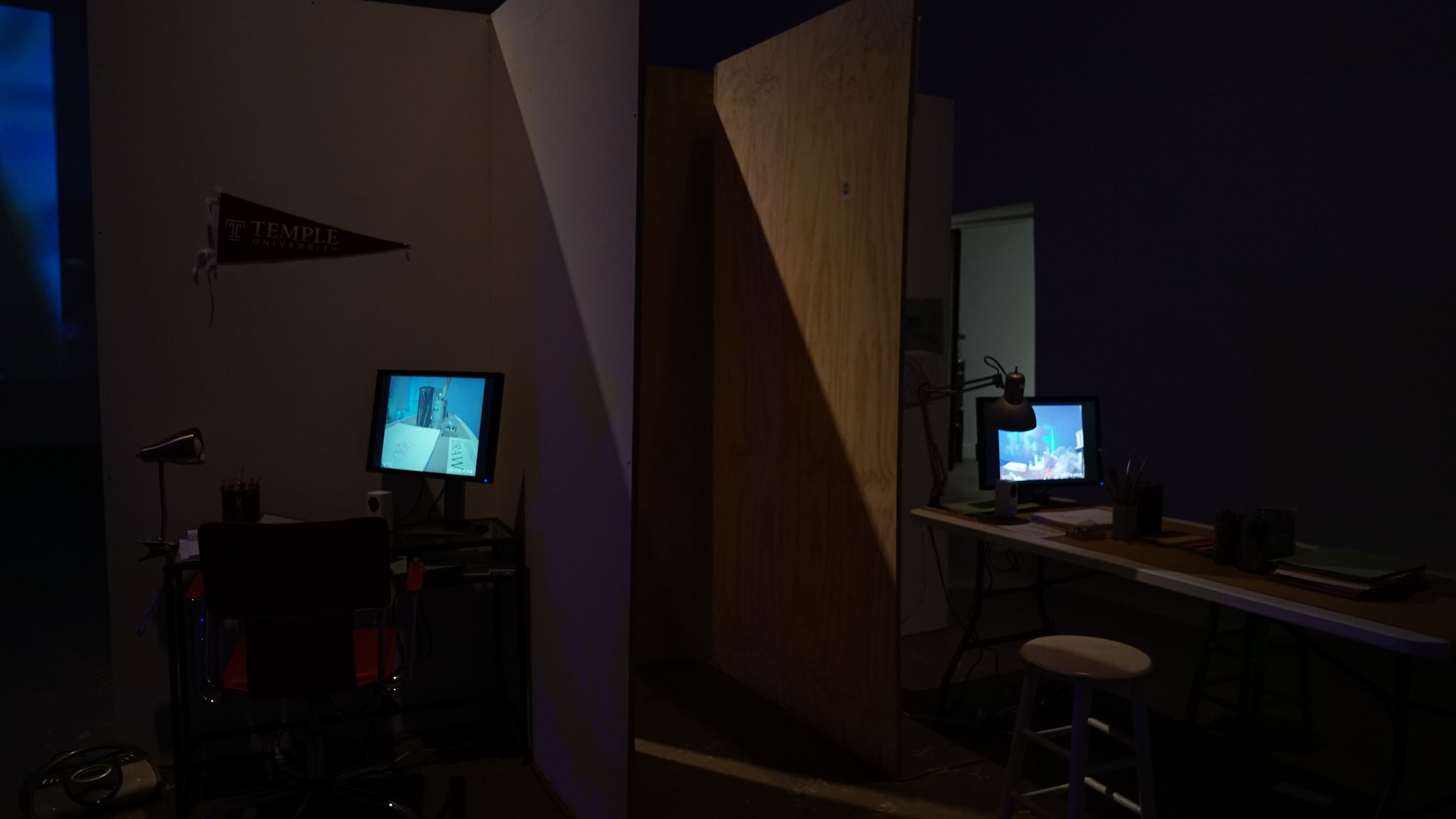 Student: Jonathan Council . Craft as Collaboration
3 room installation explores control.  What happens when control is put in the hands of the spectator? What happens when we are the creators and the observers, audience members and performers all at the same time?

Student: Jonathan Council . Close Your Eyes
Two channel visual experience, where what you see leads you down a different path from what you hear. These experiments deal with defiance and the false understanding of control for student's class assignment1

Multi-Pedia : Temple University 2018 MA Media Arts Videography Exhibition
Dec 6-9, 2018 12-6pm
Closing reception Saturday Dec 9th 5-7pm (Performance at 6pm)
Icebox Project Space 1400 N American St. Philadelphia, PA 19122
“I am proud to announce the opening of ​Multi-Pedia​: Temple University 2018 MA Media Arts Videography Course Exhibition. The exhibition features the work of Prudence Anne Amsden, Jonathan Council, Max Angelo Groff, Mary Koszycki, Chris Stephens, Morgana Sugzdinis, and Kayla Watkins.
Throughout the course students have examined the development of video art, its progressive impact on other forms of art, and its ultimate evolution into “media” art: groups of content around specific themes such as ​Laws and Constraints, Worldmaking, Interactivity vs. Participatory, Materiality vs. Immateriality, Virtual Storytelling, and Performance vs. Performativity ​helped students with their very own concern of unpacking “what is it to be human in the digital age!?”
Max Angelo Groff is concerned with loss of humanity in relation to digital technology where Chris Stephens explores the multiplicity of realities in the the digital world and how perceptions can be shaped by immersing oneself in such distorted familiar and unfamiliar situations. Mary Koszycki’s work depicts the repetitive nature of human processes by mixing footage that often alludes to ideas of macro and micro. Jonathan Council and Morgana Sugzdinis reimagine the methods of storytelling by centreing “play” as the mode of action. Council’s work is a measure to one’s humanity by offering and/or limiting control; By contrast, Sugzdinis challenges the creation of a natural resistance to discovery.
Prudence Anne Amsden expresses herself through movement or lack thereof. Juxtaposing inanimate objects and body movement through improvised expressive thought, manifest in her explorations of the everyday​. Kayla Watkins uses other expressive methods in storytelling, such as use of color or repetition and difference in order to address issues that impact black, brown, poor, and femme people.
Please join us at the closing reception or take a walk at the gallery on your own in celebration and appreciation of their efforts in exploring these important issues.​” ~Mina Zarfsaz
The Exhibition will be on view for the public from Dec 6th to 9th, 2018. The closing reception will be held on Saturday, Dec 9th 5-7pm with a performance by ​Prudence Anne Amsden​ at 6pm.
Gallery hours are Thursday – Saturday, 12 – 6pm.
For additional information please contact ​zarfsazmina@gmail.com
This course is part of the one-year, 30-credit master's program in mediaXarts: Cinema for New Technologies and Environments which aims to prepare students for professions in the creative design industries, interaction design for public organizations, and emergent cinematic art forms, including interactive cinema, projection design for performance and architecture, media installation, user experience design, design for mobile media, net art, and social media. The mediaXarts program trains artists who seek to challenge cinematic and arts conventions through narrative, non-narrative, and hybrid forms.

STUDENT BIOS AND STATEMENTS crafted for the class:
——————— Max Angelo Groff
Bio:
Max Groff is an autistic media artist born 1985, Norristown, Pennsylvania. His work explores the problems that exist between cultural humanism and the antihuman technocracy.
Statement:
By juxtaposing media both old and new, technology both current and obsolete, Max consciously embraces the absurdities of antihumanism. Through a somewhat paranoiac-critical process, he regains his Jungian soul to find that we are all — regardless of our gadgets — human. As a historically-minded media artist, Max embraces and incorporates media from decades and centuries past. Books — often old, forgotten books — serve as starting point for research and conceptual development. Max incorporates images and texts from books even when working in primarily digital formats. His love of books (bibliophilia) stems in part from the fact that he is autistic. The process of arranging books on the shelf is cathartic. For Max, autism is both a gift and a challenge.
Multi-Pedia projects:
These three works are united by the question, “at what point is humanity lost?” Technology is the dominant force reshaping our society as well as our consciousness. And yet, are we conscious of how technology is reshaping us? When cars dominate the street, and the street ceases to be a gathering place for people, humanity is lost. When print media is digitized, and the paper is trashed, humanity is lost. At the point our names no longer correlate to our faces, individuality is destroyed. At the most extreme levels, technology renders us anti-human. And yet, we are forever indebted to technology. The gadget is our new best friend, but we should never cease to question it.
Car Cult
2018, Video
This is the neighborhood in South Philly where my grandfather was born. My grandfather told me that there were virtually no cars on this street in his generation. Today those streets have undergone gentrification, and there are many shiny cars in what used to be a dangerous, working-class neighborhood. What was once a community of people now appears to be a community of cars.
The -D-e-a-t-h- Depth of Print
2018, Video
I scanned details from a book of Jakob Steinhardt woodcuts to evoke the impression of a foreign character set. The left channel features woodcuts and a woman to represent the humanity of print. The pixelation on the right channel represents the loss of cultural depth due to digitization. Pixelation becomes a form of necessary abstraction. Distortion was achieved by capturing video through a glass sphere.
Character Women (var3)
2018, Video and animation
Headshots of actresses from the days of yore are taken from the book ______. When the actress’s names are Googled, their headshots are almost nowhere to be found amongst globs of data. On the internet, we are here today, gone tomorrow. What was there yesterday could be nonexistent.
www.maxgroff.com
——————— Morgana Sugzdinis
Bio:
Morgana Sugzdinis is a brazilian graphic artist exploring the colorful aspect of conditional human behavior through interactive play.
Statement:
Because the way people are conditioned, a natural resistance to discovery has been created. To be able to awaken to new experiences, one must enter a new world letting go of all old perceptions to allow their minds to discover new experiences so something can “emerge” from it. In my work I create a platform that allows people to act upon their natural tendencies.
Multi-Pedia projects:
In this interactive installation I am encouraging the spectators to open their memories and add to the canvas using bold colors, shapes and humor, in order to help creating a work that is conditioned on their thoughts and feelings.
I believe that the exposure to a colorful and inviting environment can break the walls of behavioral adaptations. My wish is for visitors to explore the path like children and to reorient perceptions to discover nostalgic feelings.
“Walk the path”
Part 1: Answering the question map
There will be a series of different questions guiding each person through the “question map”. Each person with their unique life experience and condition, will be walking a different path.
Part 2: The conclusion
The question map will end at 4 different points, each one a popular metaphor, each metaphor a trait to be interpreted by each person.

Insert copy here, which should vary depending on your region. Accept